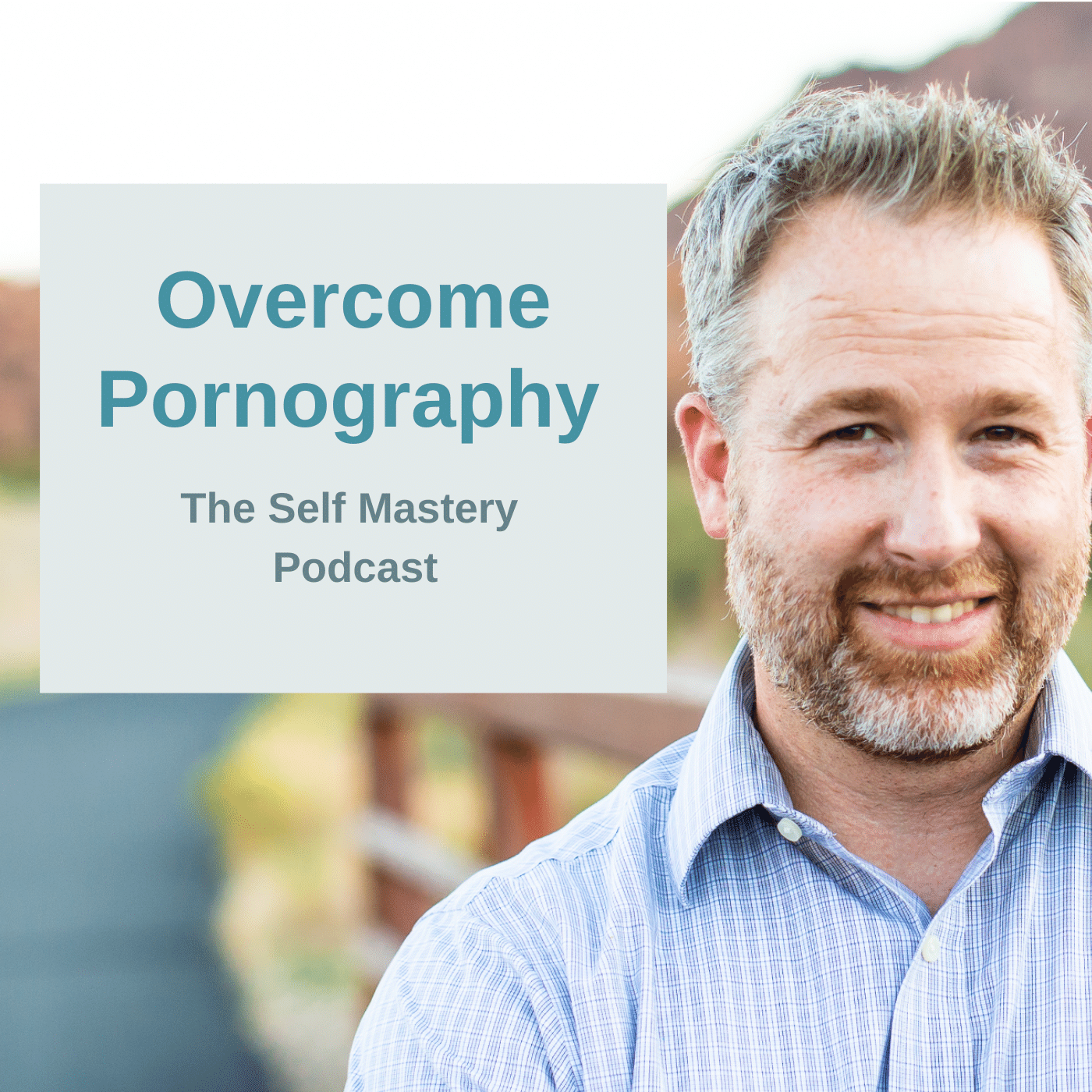 Overcoming pornography isn’t just pushing a new thought into your mind to supersede the thoughts that have naturally occurred.

I think we’ve all heard the analogy of the stage of your mind and how we can become totally free from the plague of our unwanted thoughts by just changing what’s on the stage.

While I think this is a worthy attempt to advise and assist those struggling with pornography or any other issue, it falls short in actual practice.

There was an experiment called the pink elephant or white bear experiment that gave us a pretty good indication of what trying to push thoughts out of your head or trying not to think a certain thought does.

If you’re not familiar with the pink elephant experiment, let me tell you about it, from the perspective of bacon.

I love bacon.  You have probably heard me talk about bacon on the podcast before, but if you haven’t it is one of my top favorite foods.

The smell of it is inviting, the flavor is the most amazing combination of salty and umami, the crunch of it in a BLT sandwich is the most perfect feeling in the world.

Now that you are hopefully fully in the grips of a desire to eat bacon, let’s try the experiment.

Starting now and For the next 60 seconds, you are not allowed to think about bacon.  Each time you think about bacon then you have to pay me a dollar.  (Feel free to venmo me @theselfmasterycoach)

Part of the reason you’ll need to pay me a dollar is to raise the stakes of the experiment.  The higher the stakes in this bacon experiment, the more difficult it will be for you to force your thoughts to stay away from the crispy, chewy, warm, savory bacon that you’ve conjured up in your mind.

As you try not to think about the bacon I’ve asked you not to think about, you might find your mind wandering back to that unwanted thought. You might find that the smell of bacon in the morning greeting you from bed just pops into your mind.  You might realize that you’re thinking about your favorite kind of bacon, thick or thin, Maplewood or smoked.   Just make a tally mark each time you do think of the delicious, amazing bacon that you’ve eaten in the past, or count on your fingers each instance of all the future bacon you’ll eat as it pops into your mind.

Any time you think about the bacon in your food and on your plate, you might also notice how much money you lose to me.  Notice how, when you lose money, you don’t like it.  So, you try harder not to think about the mouthwatering, flavorful treat that you’re not supposed to think about.

How did you do?  If you are like most people you probably found that bacon came to mind a lot more than you might have wanted it to.

Now, you don’t really have to Venmo me, but you also might have noticed that if you took up the challenge for real and really intended to send money if you thought of the bacon, how much more difficult it became because of the loss factor.

This is essentially the pink elephant or white bear experiment.

In a series of experiments, researchers found that participants were more preoccupied with thinking about a white bear, despite being asked to not think of one.

The conclusion was that trying to suppress thoughts “has paradoxical effects as a self-control strategy,” which can lead to obsession or preoccupation despite desiring and working toward the opposite.

What does this have to do with pornography?

You probably already have some sense, but I’m going to share an experience I had recently with a client that shows how we tend to show up around pornography and how we can think about this issue in a new and more effective way.

After a session, my client texted me his plan for the coming week.  This is what he said:

“What I’m going to work on:

Notice thoughts when they come along and practicing (sic) speaking to the thoughts saying: “it’s ok that you’re here.” That’ll help me remember that they’re a part of me. Ask myself “does this thought serve me?” If it does: “how?” If it doesn’t: replace it with a more validating thought.

I’m bad at that last part… what would you do to replace thoughts that don’t serve you? Do you replace them by complimenting yourself? By doing something kind for yourself? Any feedback is great”

If you listened to that and thought, “ok, that makes sense, that’s a good plan.” Before I overcame pornography myself, I would have thought was a good plan too!

Obviously, I didn’t do a very good job explaining his new experiment.  So, I’m going to share with you what I shared with him and point out two issues he has with the way he is trying to deal with his thoughts.

The two issues in this plan are:

Rather than thinking that our thoughts are part of us, it is often more helpful to believe that the thoughts our brain offers us are like the sounds coming from a radio.  That radio is a constant in our lives and is constantly broadcasting.  The part of our brain that does this is doing its best to let you know all the bad things going on in your life.  You could call it radio Karen.  Radio Karen is reminding you of all the bad things you did in the past, she’s telling you of all the bad things that might happen in the future, and she is definitely there, letting you know about all the things that are wrong with you.

Radio Karen (sorry all the Karens out there listening) sometimes offers you valuable ideas or thoughts, but not usually.

So, instead of believing that the thoughts are part of you, think of them as if Radio Karen were just there in your mind, always doing her job, but not who you are.

In doing this, you can step away from radio Karen and become an observer of her broadcasts instead of a participant.  When you are an observer, you are more likely to be able to objectively determine whether what she is sharing is valuable or not valuable.

That part of my client’s plan was good, asking questions that help objectively determine the value of the belief that Radio Karen is broadcasting is totally valuable.

The issue he will have is the second part, trying to replace thoughts with new, better thoughts is a lot like turning on a new radio and turning up the volume to try and drown out Radio Karen.

\A lot like trying to not think of bacon, radio Karen will burst in there and breakthrough and turn up her own volume to get heard.

That is the battle that is created by trying to shove one belief off the stage to put something else on there.  Each side pushing the other just to get a few moments of your time.

The simplest reason why pushing a thought out of your head and replacing it with a new one won’t work is the same reason that turning to pornography ultimately doesn’t help us feel good over the long run.

People aren’t capable of controlling how we feel for long periods of time.

We can do it in short bursts.  That’s willpower and it ties into the fight or flight system that we all have to take control in acute moments for finite periods of time.

So, if that isn’t going to work, what is?

My client, the one who said, he was accepting his thoughts as part of him and then trying to replace those thoughts and anyone who is struggling to deal with unwanted urges, thoughts, and feelings needs to face them. Head on. Without thinking that he can manipulate or coerce his Karen out of existence.

First, we take a step back and become the watcher or the observer of our brain.  No longer is everything that our brain offers us part of us or from us or about us.  It is simply something that is playing on Radio Karen.  It is there, in the background, the same way a radio playing in a department store is part of the background.

When it offers us an alert, like an Amber alert or a storm warning, we listen to it, we decide if it’s relevant, and then we go back to what we were doing if it isn’t and if it is, we do something about it.

If we can stop believing that our brain is offering us only relevant information and remember that it is offering us mostly negative, not always useful information, then we can step back from it.  We can observe it objectively, knowing that most of what it offers isn’t relevant or useful.

In doing so, we can engage curiosity to hear and judge what it is that our brain is offering.
I get these Amber alerts from northern Utah. I look at them, I see there is something that is too far away for me to do anything about and then I stop looking at it and move on with my day.

Radio Karen is like a constant barrage of Amber alerts or Storm Warnings.  Most of them don’t have anything to do with me or where I am, or what is going on in my neighborhood. So I see them and observe whether they are worth my time, then, most of the time, I go back to what I was doing.  Every once in a while, I see it and I say, this is something I need to deal with.

But not nearly as often as our Radio Karen would like me to.

The key here is to engage with this in the same objective way you would engage with those Alerts you get on your phone or hear on the radio.

So, when my brain says, “I’m a victim because she shouldn’t have done that” we can take that alert and just curiously observe it.  Being curious, is this true, does believing it help me in any way, does this create the value in my life that it seems to present itself as, and so on.

Often times the answer I give to these questions is no, but sometimes I get stuck.  So, instead of no, I say, “Maybe”.

"Maybe" lets me not have to dig into it.  It frees me from having to find the “right” answer.  It allows the thing be without me having to refute it or embrace it.

Using “Maybe”, or chosen ambivalence is a wonderful tool in this conversation with Radio Karen.

It will give you the ability to manage what is going on for you, without going to battle, struggling, or fighting your own thoughts


Listen to the Full Episode: